Learn to Read the Bible Effectively - Free Online Bible Course
Welcome / Lesson 1 / Lesson 2 / Lesson 3 / Lesson 4 / Lesson 5 / Lesson 6
In this first session of the course, we will look at some background information about this fascinating book. It is a book of amazing diversity: read the Bible and you will find a mixture of enchanting history, beautiful poetry, remarkable prophecy, great wisdom, simple proverbs and difficult teaching.No one can understand modern society without understanding the history and message of the Bible. It is a holy book for Christians, Jews and Moslems and it has played a major part in the development of world civilisation and social values. The Bible has played a key role in influencing the world. Whether you believe it or not, you cannot ignore it.

Furthermore, it makes extraordinary claims of itself. For example:
​
All Scripture is God-breathed and is useful for teaching, rebuking, correcting and training in righteousness, so that the man of God may be thoroughly equipped for every good work. (2 Timothy 3:16–17)

It is only sensible to test these claims for ourselves. If its claims are true, we must read the Bible carefully and thoroughly. This course is designed to help you test the Bible’s claims and read it effectively.

The Bible is the world’s best seller. It has been estimated that between 1815 and 1975, about 2,500 million copies of the Bible were printed. Each year approximately 100 million Bibles or parts of Bibles are distributed. These are staggering numbers when compared with the very few books which ever sell just one million copies. The best-selling novel ever has only sold about 30 million copies over a period of more than 20 years. What is it that makes the Bible consistently out-sell every other book ever produced? It does it every year, and has done so for hundreds of years.

No other book is so widely quoted or so widely studied. More books are written about the Bible than any other book.

The Bible has endured thousands of years of copying by hand, yet it appears to have remained almost unchanged.

It has been burned, banned and outlawed many times. For example, in 1408 England passed the following law:

"that no one henceforth on his own authority translate any text of Holy Scripture into English or other language . . . and that no book of this kind be read."

Those who did translate it into English (such as William Tyndale) were killed. Others were burnt at the stake for saying the Lord’s prayer in English. Only a few years ago, it was a criminal offence in many communist countries to have a Bible in your possession.

A library of books

The word “bible” comes from a Greek word biblos meaning simply “writings”. The Bible is not just one book—it is one volume but it contains 66 separate books written by many different authors. 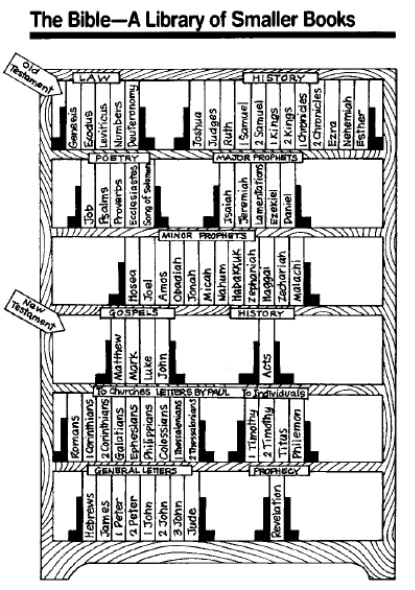 At the front of your Bible you will find a list of these 66 books, but you probably already know many of the book names and some of the stories they contain. Test yourself in the quick quiz below.

Now if you check the list of books in your Bible you will see the ones mentioned above, but others too that are familiar. In fact, you may have heard of quite a lot of the Bible stories and people. Many people will have heard of the ten commandments and the Lord’s prayer. Some will know a few of the stories, like Noah and the Ark, Samson and Delilah or David and Goliath. Names like Moses, Elijah, Paul and the Pharisees may be familiar. But how do they all fit together? One of the aims of this course is to help you to gain an overview of the Bible and what it is all about. You can build on your knowledge quickly, if you will read your Bible.

The 66 books were written by about 40 different authors of many different occupations: kings, shepherds, prophets, herdsmen, teachers, lawyers, doctors, and so on. These authors lived in ten different countries and wrote over a 1,600 year time span in three different languages. Yet their message is consistent.

The bookcase below shows the 66 books of the Bible divided into two sections: the Old Testament and the New Testament. A testament was a covenant or an agreement. So the two parts of a Bible simply record two covenants, each between God and men.

Finding the passage
In these notes (and in most books about the Bible) we use a shorthand way of describing Bible passages. The Bible is a big book and locating a particular passage can be difficult. Each book of the Bible has been divided into chapters and each chapter has been further divided into verses.

The Old Testament tells of events from the creation of man. It gives God’s word as it related particularly to the people of Israel. In contrast, the New Testament records God working with people through his son, Jesus Christ. In the New Testament it becomes clear to all that God’s promises are to all people, not just to Israelites.

Many Christians read only the New Testament. After all, does not the very name Christians indicate that only records about Jesus Christ are of use to them? This is a tragic error. It is not possible to fully understand the New Testament without also reading the Old Testament. Never let us forget what Jesus said:

You diligently study the scriptures [the Old Testament] because you think that by them you possess eternal life. These are the scriptures that testify about me. (John 5:39)

The Bible is a book of amazing diversity: read the Bible and you will find a mixture of enchanting history, beautiful poetry, remarkable prophecies, great wisdom, simple proverbs and difficult teaching. The bookcase shown above divides the books in each testament into categories: law, history, poetry, prophecy, letters, etc. These are man-made categories but provide a useful aid to help remember what each book contains.

Law
The five law books at the front of your Bible are sometimes called the Pentateuch (meaning five books) and contain the early history of God’s people as well as the laws he gave to Moses for Israel.


Poetry
Five of the Old Testament books are largely poetic. For example, you may know some of Psalm 23: “The Lord is my shepherd”. Bible poetry does not rhyme (even in the original languages). It is classified as poetry because of its structure.

Prophecy
Human beings cannot foretell the future. If they could, we would not have insurance companies and bookmakers. Yet the Bible is full of forecasts or prophecies. Some books contain mostly prophecy and these are in the section labeled “Major Prophets” and “Minor Prophets” in the bookshelf. (The minor prophets are smaller books, not less important!) In these books, God foretold much of the history of Israel and nearby nations. Revelation, the last book of the Bible, is also a book of prophecy.

Gospels
The four gospels are records of the life of Jesus. They contain parallel accounts of many things Jesus did and said although each of them contains information that the others omit. The word “gospel” means “good news”.

Letters
Much of the New Testament consists of letters. Most of them were written by the apostle Paul to churches and individuals. A summary of each of the books of the Bible is found in Appendix A.

The Bible contains quite a lot of information about when events happened. When archaeological information is also taken into account, a fairly detailed chronology of the Bible can be obtained from about the time of Abraham. Before Abraham, there is insufficient information to accurately date any event.

The historical events described in the Old Testament take place over a period of several thousand years. A much shorter time is covered by the New Testament—only about 100 years. Bible history is highly selective. There are long periods about which the Bible says relatively little (such as the time between Adam and Noah) and short periods about which the Bible says a lot (such as the last week of Jesus’ life).

The charts in Appendix D show more detailed timelines for the Old Testament, New Testament and the ministry of Jesus.

Try putting the following people on the chart below: Jesus, Moses, Adam, Noah, David, Abraham, you.

When the Bible describes the geography of the events it records, it is helpful to look at a map to see where the places were. Almost all of the Bible concerns Israel or neighbouring countries in the Middle East. Of course, modern atlases of the same area aren’t particularly helpful because the towns and cities have different names or may have ceased to exist altogether. Many Bibles contain maps as an appendix and some simple maps are found in Appendix C of these notes.

Why read the Bible?

Although the Bible has 66 different books, and many thousands of verses, a single theme runs strongly through the book from start to finish. This theme is the relationship between God and human beings—a theme of love and salvation. Through the lives of individuals and nations this theme develops.

Most people who set out to read the Bible seriously, soon find it a disturbing book. The Bible claims to be the actual word of God, who created and sustains the universe, and as a result the Bible lays down rules for living and outlines the consequences of obedience and disobedience. No wonder the Bible has a real impact on any serious reader.

The Bible . . .
Make no mistake—the Bible can change your life. Not the Bible itself, of course, but its message. In the Bible, God has revealed himself as righteous and holy. By contrast we all are unholy sinners. And in the Bible, God offers us the way of escape from our sin, the saving blessing of the Lord Jesus Christ. Jesus has called people to him for 2,000 years and offered them life in a hopeless world. The Lord’s invitation and command is

Come to me, all you who are weary and burdened, and I will give you rest. Take my yoke upon you and learn from me, for I am gentle and humble in heart, and you will find rest for your souls. For my yoke is easy and my burden is light. (Matthew 11:28–30)

This invitation has appeared wonderful to many. They have seen their lives as being without meaning or happiness and going nowhere. An active conscience is a terrible thing if there is no way out. Anyone who has done anything of which they are later deeply ashamed, knows just how wonderful this invitation is. If it works. History shows that it does. People who turn to God in faith and respond to the call of the Lord Jesus Christ are changed. They are not immediately made perfect, but they are made free. Free of fear and guilt. Take the opportunity over the years ahead to read the Bible, learn more of God and his son, and follow him.
Proceed to Lesson 2 >