How will God's Master Plan be Realised? - Lesson 2

The aim of this section is to explain how the Master Plan of God will become a reality. We will consider the Promises made by God to people of faith many thousands of years ago. We will also look at the kingdom of God and explain why it is an essential part of God's Master Plan.

This lesson deals with God's method of realising the Master Plan. God has revealed His plan to people of faith through some special promises. This lesson begins by looking at two of these special promises made to Abraham and David. The section then focuses on the subject of these promises, Jesus Christ and God's future kingdom. The discussion concludes by explaining how the promises, Jesus Christ and the kingdom provide the solution to the realisation of God's Master Plan.

3.1 Does God have a Plan to guarantee His Master Plan?

From lesson 1 we learnt that God's Master Plan is to fill the earth with His glory (character). Humans are the means by which God can achieve this plan, but we also learnt that humans are constantly failing to live up to the character of God. Does that mean the plan will never be fulfilled? That would only be the case if man alone was in control. Thankfully, that is not the case - God is in control (Daniel 4v25) and He is determined to make sure the plan becomes a reality. God has revealed His solution to us through some special promises made thousands of years ago.

From the moment the first man and woman failed to live up to the purpose of life, by sinning in the Garden of Eden, God set in motion a special plan to guarantee His Master Plan. God revealed this plan to the men and women of faith through a series of promises. Like a jigsaw puzzle we can fit all the pieces together and get a full picture of God's solution.

The first set of promises we will consider were made to Abraham, the father of the faithful. The promises are outlined in various passages in Genesis chapters 12 through 17. The following summarises three of the most important promises made to Abraham:

Genesis 13v14-17
Promise of inheritance of a land forever, and a special seed.
"....all the land that you see I will give to you and your offspring forever.."

Genesis 17v1-9
Promise of everlasting possession of a land and father of many nations.

The promises made to Abraham spoke of the everlasting possession of a land, specifically the land of Canaan, (modern day Israel) by Abraham and a great people which would be his descendants. They also make special mention of a seed through which the people of the promise would be blessed.

The second set of promises, we will consider, were made to David, a king of Israel. These promises are found in 2 Samuel 7.

2 Samuel 7v12-17
Promise of a seed who would rule on David's throne as king forever.
"..I will raise up your offspring to succeed you,..and I will establish the throne of his kingdom forever..."


Notice the occurrence of the word "seed" or "offspring" in the New International Version (NIV) once again. In this promise God tells David that one of his descendants will establish his throne forever. We know that David's throne was in Jerusalem (1 Kings 2v11). The promise tells us that this great king is to rule from Jerusalem forever. This promise gives us another piece of the jigsaw puzzle of God's solution.

3.3 What do these Promises Mean?

If we put all the pieces of the jigsaw puzzle together that we have discovered, we find that the promises are concerned with the following:

1. The promise of a seed (descendant) of Abraham and David who is to be King forever on earth and through whom blessing will come.

2. The promise of possession of a special land forever.

3. The promise of many people inheriting this land foreverThe promises therefore concern a king, a land and a people - or in other words a Kingdom. The promises centre around the king of this kingdom or the 'seed'. In Galatians 3v16, Paul tells us that Jesus Christ is the promised seed. Through the promises, God preached the kingdom and Jesus Christ to the men and women of faith. It is through this coming kingdom and the efforts of Jesus Christ, the king, that God will realise His Master Plan.

3.4 Jesus Christ, the Kingdom, and the Master Plan

Let's put all the pieces together to get the full picture! Jesus Christ represents the key to God's Master Plan, He is the key to the realisation of the plan. The promises of God centre around the promised seed which is to bring blessing on many people. Jesus Christ is the only man who ever achieved the purpose of life,that is to have fully revealed the glory of the LORD in his life. John describes Jesus as the glory of God in John 1v14

Jesus never sinned - he perfectly manifested God's character in his life on earth. For this reason he is the centre of God's Master Plan. Only through association with the death and resurrection of Jesus, in baptism, can we hope to reveal the glory of God (Romans 6v3-4). When Jesus ascended from the earth, the angels gave the disciples the following message:

"Why do you stand here looking into the sky? This same Jesus, who has been taken from you into heaven, will come back in the same way you have seen him go into heaven.'' ( Acts 1v11 )

Their message was that Jesus was coming back to the earth. But why would Jesus want to return to this earth? Well, the promises spoke of the everlasting kingdom, and Jesus ruling on David's throne - none of these promises have been fulfilled (Hebrews 11v39) . Jesus Christ is coming back to set up God's kingdom on earth, to rule as king from David's throne - Jerusalem. The purpose of the kingdom will be for Jesus to bring all men and women into subjection before God (1 Corinthians 15v22-28) . In other words Jesus is going to rule until every man and woman perfectly reveals the glory of God. The kingdom will grow until it fills the whole earth and God is all in all (Daniel 2v34-35 ). At last the Master Plan will be a reality because the earth will be filled with the glory of the LORD as the waters cover the sea(Habakkuk 2v14 ). The kingdom and the rule of Jesus is the means by which the Master Plan will be realised. (italics mine)

The Bible tells us a lot about the conditions that will exist during the reign of Jesus on earth. Not only will men and women begin to reveal more perfectly the character of God, as He first intended, but in addition, the results of this obedience will lead to a new creation.

Peter talks of it as a "new heavens and a new earth" ( 2 Peter 3 v13 ), a time when the destruction and pollution of this world will be removed. The prophet Isaiah tells us that during the time of the kingdom of God, the deserts will bloom with roses. His beautiful vision in Isaiah 35 describes the conditions of the kingdom. It will be a time of peace, prosperity and harmony ( Isaiah 35 ). It will be a kingdom beyond our wildest imaginations ( 1 Corinthians 2v9-10 ). For this reason Jesus appealed to his disciples to make the kingdom of God the most important thing in their lives ( Matthew 6v33 ).

3.6 Where will the Kingdom be?

From the above it is clear that the Kingdom of God is going to be established on earth. The purpose of the kingdom is to ensure that the earth is one day filled with God's glory. It must therefore be an earthly kingdom. Jesus confirms this for us in his prayer given to the disciples:

"Your kingdom come; Your will be done on earth as it is in heaven" ( Matthew 6v10 ) We are told that the centre of this kingdom will be Jerusalem and that the law of God will flow from this place throughout the earth ( Micah 4v1-2 ).

3.7 When will the Kingdom come?

Jesus made it very clear that no one knows the exact time of the coming of the Kingdom of God ( Matthew 24v36 ). However the Bible does gives us signs that tell us that the Kingdom is coming soon. 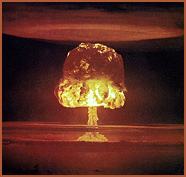 We have learnt that:HOW WILL GOD'S MASTER PLAN BE REALISED?
God's Master Plan will be realized through the kingdom of God on earth.